Speech delivered by Senator Mobina Jaffer at the 24th Annual Asia Pacific Parliamentary Forum in Vancouver, B.C. on February 17, 2016. Senator Jaffer was the co-chair of the first Meeting of Women Parliamentarians at this year’s APPF conference. 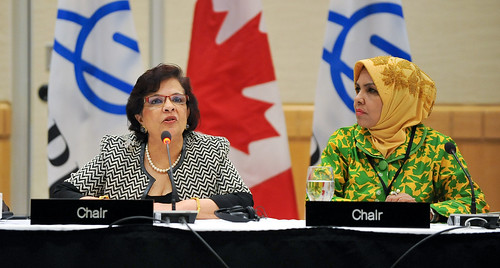 Last September, world leaders adopted the United Nations 2030 Agenda for Sustainable Development. This new agenda, which sets the global development priorities for the next 15 years, includes a standalone goal to achieve gender equality and empower all women and girls.

Taking into account the new global context, I am seeking your support for Canada’s resolution on women’s economic empowerment. The empowerment of women and girls is directly relevant to all members of the APPF, particularly where it concerns our mutual efforts to increase regional economic cooperation.

Economic empowerment is understood as the ability to contribute meaningfully to economic growth, and to ensure that this contribution is fully recognized in the whole society. In turn, this contribution allows empowered groups and persons to reap a fairer share of the benefits of growth and prosperity.

Evidence shows that higher levels of gender equality in a country are associated with lower poverty rates, and higher scores on the Human Development Index. Addressing the constraints to women’s participation in the economy has also been linked to higher GDP growth, higher income per capita, and greater economic competitiveness.

In order to advance women’s economic empowerment in the region, I believe that governments can act on three main fronts: education, equality in employment, and entrepreneurship.

We all know that the educational success of girls and young women has an important impact on their future. Whether in my country of Canada or elsewhere in the world, research has demonstrated the correlation between educational attainment and economic participation.

A second priority is to ensure equality in employment, which includes guaranteeing that women are remunerated fairly, providing women with access to social infrastructure support so they can seek employment, and legally protecting women from discrimination in all sectors of the economy.

In Canada for example, the Employment Equity Act requires that employers remove barriers to employment for disadvantaged groups, including women.

It is imperative that our countries commit to protecting labour rights and extending social protection systems to all individuals, including women as they are more vulnerable to precarious and informal employment.

This leads me to my third point: promoting opportunities for women to undertake entrepreneurial activities and participate in economic decision-making. This certainly also applies to Canada: women represent 47 percent of the labour force, but occupy only about 21 percent of board seats at Canadian stock index company.

Obstacles, such as limited access to capital, financial literacy, and secondary and post-secondary education, impede women entrepreneurs’ ability to establish, lead and grow businesses. These obstacles consequently prevent their communities from benefitting from women’s entrepreneurial activities.

Regional organizations of the Asia-Pacific are making efforts to promote the roles of women in the economy.

In conclusion, I would share the convictions that all parliamentarians – women and men – can play a pivotal role to build consensus on the idea that men and women across the Asia-Pacific should benefit equally from the tremendous opportunities in what is today the world’s fastest growing economic region.

This is why I am seeking your support for the adoption of Canada’s resolution on this topic.

I look forward to working with you to build this consensus and to urge our parliaments to implement measures – such as those proposed in the resolution – that will promote women’s economic empowerment in the Asia-Pacific region.