The Canadian Charter of Rights and Freedoms: Democratic Rights, Part 3 – Voting Rights in the Modern Day

The Canadian Charter of Rights and Freedoms: Democratic Rights, Part 3 – Voting Rights in the Modern Day 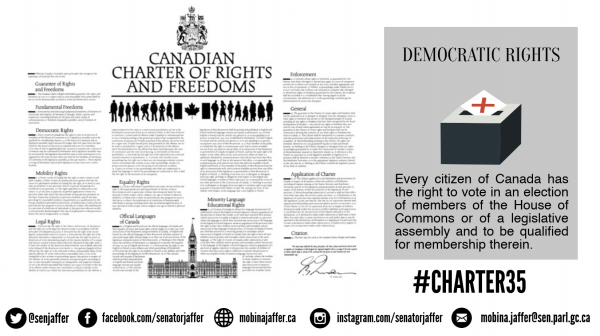 In my previous blog, I outlined how the democratic rights from Sections 3 to 5 of the Canadian Charter of Rights and Freedoms have evolved over time. While Sections 4 and 5 have only ever been raised in court once, Section 3 has seen many cases and ensured that laws preventing specific groups from voting are struck down.

Now that those laws are gone, cases involving Section 3 today involve a different question: do laws and practices which make voting difficult violate Canadians’ right to vote? In today’s blog, I will highlight cases that addressed this question and how Section 3 is being debated today.

Questions about whether these laws are acceptable under the Charter can be traced back as far as 1985, when the province of British Columbia had stopped providing absentee ballots for its elections.

At the time, the government argued that scrapping absentee ballots did not explicitly prevent any group from voting, and was simply a measure to cut costs and problems associated with counting these votes.

The Supreme Court disagreed. In its ruling, it noted that two groups in particular were affected by this policy: students, military members, and citizens with commitments abroad. As a result, the court ruled that this law violated their right to vote!

After this ruling, similar laws that made it difficult for specific groups to vote were challenged in the years that followed. Laws that prohibited advance voting, mail-in ballots, polling-day registration, the use of multiple languages in election documents and ballots for the blind were all struck down thanks to Section 3!

Despite these victories, unreasonable barriers preventing people from exercising their right to vote still exist today! In 2014, the previous government passed the Fair Elections Act and made most forms of ID that do not include the voter’s address invalid when registering to vote. I fought hard against this measure at the time.

Much like the 1985 case, the government argued that the Fair Elections Act was not made to prevent any groups from voting, but to prevent voter fraud where people pretended to live somewhere they did not.

Many people question this logic, since studies have already proven that voter fraud almost never happens. Further, it was proven that four groups were disproportionately disadvantaged by this law: the young, the elderly, the homeless and aboriginal people.

Each of these groups has circumstances that make it difficult for them to get the kind of ID that the Fair Elections Act requires. Since they were unable to use the ID they usually use, an estimated 250 thousand people were prevented from voting in the last election!

As a result, the Fair Elections Act is still being challenged in court today.

Every previous case has had a single common thread of logic: in each case, the Supreme Court has confirmed that it is not enough for a government to just guarantee the right to vote. It must also ensure that the right can be exercised!

The question of whether laws and practices placing barriers that make voting difficult violate Canadians’ right to vote has been debated for years, and will likely continue to be debated in many cases to come!

Please read my next blog, as I highlight some of the most important cases involving Section 3 of the Charter, and how they have impacted the right to vote in Canada.